Mike Sheets, Carroll High School 1983 Graduate, received notification from the Greater Dayton Baseball Hall of Fame that he will be inducted into the 2018 Class (2nd class of recipients) on Saturday, July 13, 2019 at the Knights of Columbus Hall Dayton Council 500.

Honorees include the following:

Michael Sheets has been the Carroll High School Head Varsity Baseball Coach since the spring of 1996.  He first returned back to Carroll in 1985 as an assistant JV coach under Coach James Hemmert.

The baseball team, led by Coach Sheets, has had a lot of success.  Coach Sheets has had a total of 345 wins!  In 1999, the boys’ baseball team won their first ever Mid-Miami League title with the best record ever for a Carroll baseball team. They were also sectional champs and district runners-up. They finished the season with an exceptional 22-5 record. In 2001, they were MML champs again, and in 2002, the Patriots were the MML and sectional title champions with a 25-4 record!

The 1999 through 2002 rosters included eight players who went on to play college baseball, including Dan Biedenharn, Jack Leopard, and Chris Coleman who all played in the College World Series. Dan Biedenharn also won the Rawlings Gold Glove Award as the best Third Baseman in the country in 2007. Coach Sheets is most proud of the fact that five coaches who began their coaching careers under him at Carroll have gone on to become head coaches at other programs, and six of his former players are now high school coaches.  Mike is most distressed about the fact that he has now coached a player who is a grandfather.

Coach Sheets has given so much of himself to the Carroll High School Baseball Program.  He can be seen time and time again working on the fields and doing everything he can to help the program succeed.

In the summer of 2017, construction began on new Carroll dugouts, complete with a locker room, garage, concession stand, and press box.  Coach Sheets is proud to be a part of this endeavor, as he participated in the building of the original dugouts.

Those dugouts were built in 1982 by Red West, Ed Heigel, and Bill Sheets (Coach Sheets' father).  The manual labor was done primarily by the 1982-1983 baseball players (Chris Sorrell, Jim West, Mike Sheets, Jose Davila, Pat Butler, Eddie Heigel, Tony Ferraro, Jim Wolodkiewicz) who hand-dug the footers for the dugouts.  The cinder blocks, originally delivered to build a new level on the stadium press box in 1982, were "borrowed" by the builders to construct the baseball dugouts.  Construction was completed quickly over a long weekend, making sure that the cinder blocks couldn't be redirected to their original intended use.

In 2018 and beyond, who knows what lies ahead for the Patriots?  Carroll has grown to a school with over 1,200 students in the early 2000's, only to drop below 800 students today.  Carroll has moved from Division 1 in the OHSAA Tournament, down to D-2 and now back up to D-1 again, thanks to the Ohio Competitive Balance program that is intended to "level the playing field" against private schools due to the "rampant recruiting that exists."

Coach Sheets states: "All of Carroll's athletic teams now face the necessity of maximum participation by our athletes.  Our students now must not only be fully rounded Catholic young people, they must also be excellent students AND multiple sport athletes.  We are small enough now that our athletes need to 'cross train' and participate in multiple sports so that all of our teams can thrive in this new environment.  And our athletes need to recognize that we need dedication to our sports, just as they have to dedicate themselves to their studies.  We are challenging them to work harder and participate more than they ever have."

Carroll Baseball - "Effort is Everything"

CHS Alums and Friends Are Needed To Support The Patriot Express. 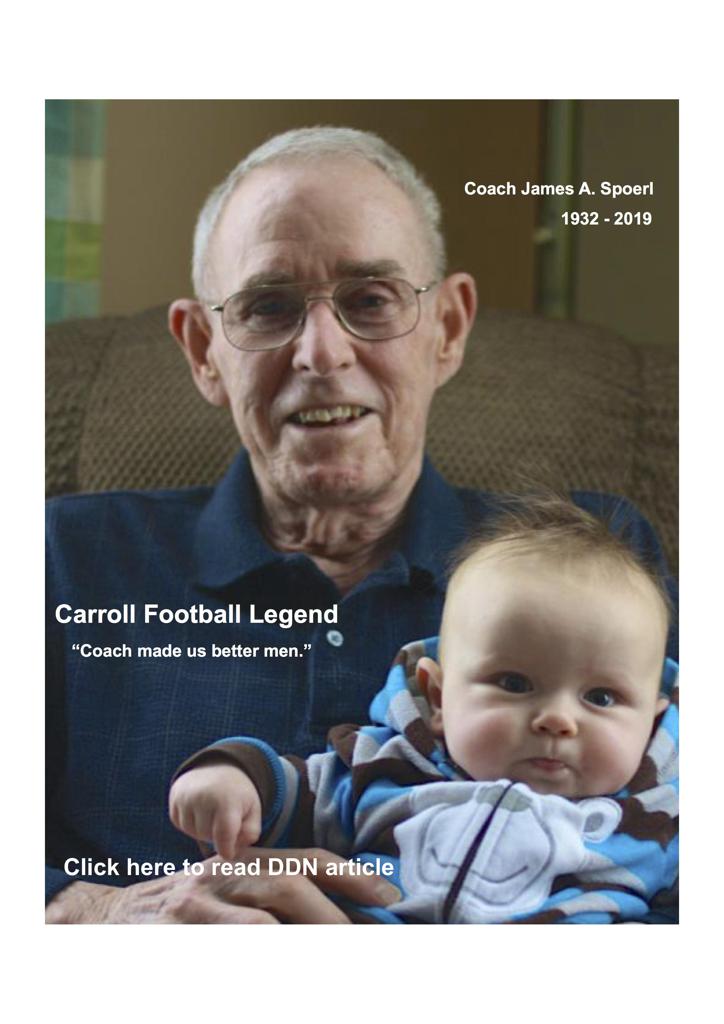 Interested in becoming a sponsor of Carroll Athletic Club?